When I will be king : All bureaucracy will be corrupt

January 15, 2014
We all hate corruption. Why? Because it creates an disparate, divided state, part of which is corrupt, and part not. As a future monarch of a futuristic society, I want my state to always be in unison. So in my administration, all bureaucrats will be corrupt. In fact, corruption will be the sole criterion for successful career growth; the more corrupt the official, the higher up the ladder will he be.

To the righteous, this idea may seem outrageous, but hey, isn't this an unfair world already? A constable of the local police earns more than a software developer today. So by the classical laws of measurement, it will be fair to say that he produces more value to the state than the software guy. And it then becomes the state's responsibility to reward him for what is rightfully his. 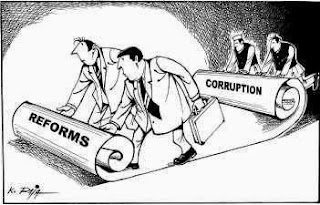 What is a society constituted of? Common people! The Aam Aadmi! And only if each of these "Aam Aadmis" progresses that the society will progress as a whole. And what better a way than legalizing what is already widespread?

AIT a.k.a Army institute of Technology

April 22, 2010
Been quite a while that I wrote anything. But I am glad, that I am back. Now that I am done with my submissions for my third year second semester (and that too right on time. Bang!), and 10 days right before the practicals start banging my head off, I am feeling a certain urge of writing about this place. AIT. Army Institute of Technology, Pune. But how could I end up writing a post on AIT . I should instead be doing something else . Anything …sleeping , rope-skipping, play gilli danda , dancing or doing anything more worthwhile. But NO! My idiotic , uncontrollable , insensible , psychotic and involuntary mind could think of doing nothing else when I was getting the urge to write this senseless post. But as I am a man of my words [huh ? What words ? Half the time I don’t even know what I speak] . MAN AM GOING CRAZY THESE DAYS . I blame this summer heat for turning me crazy with the utter joy of timely submissions, So I am going to write something on AIT. Mighty mighty AIT they s
8 comments
Read more