I am going to vote this time, are you?

September 03, 2013
I had never been interested in polity. Neither in school, nor in college, and not even when I started rising the corporate ladder. I always thought I am created for more novel deeds and politics is only for subtle minds. I had always been a torch-bearer of the "sab-chalta-hai", the cliché Indian psychology.

I have bribed, favoured, broken rules and always gotten over clean, because, well, I, always had the support of some known faces. These minor acts of, lets say negligence, never got on to my nerves because everyone around was doing the same. And I did not want to play any different.

Who, you ask, am I?
Well, I am the educated, common, Indian citizen. I am you.

I never really cared who my MLA is, or which party is in power. I have always enjoyed Election day as just another holiday. And I never, never gave a thought to casting my vote. However this is going to change this time.

I will cast my vote this time. I will not remain a silent observer any further. I will foresee the formation of a new rule. A rule, which, at the least, gets us some head-start in the global economy race.

I have seen this change in Bihar, when they threw Laloo out and brought Nitish in, the second time. Rising leaps above caste/creed/religion, they voted for someone who brought financial stability for them. I want to see the same in Delhi. I don't care if the leader happens to be a religious fanatic. If he can get us an economic boost, a financial stability, I am going to vote for him.

For once, I will play ostrich to what happened in Godhra, and will see the formation of a Govt. which is not as timid and as loose as the current one.

And I request you dear reader, I beg you, get yourself your voter ID and go vote. And vote sensibly. 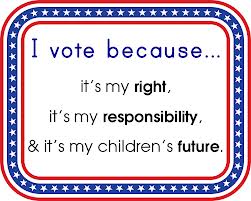 November 14, 2011
"I Quit" , said she and walked out as briskly as she could, her face as stern as a stone. She didn't look back. I wanted her to. I felt helpless, somewhat creepy, and a sudden chill went down my spine. I didn't know what to do. I wanted to just run away. Run away from her. Run away from this world. Run away to some distant place where I could be myself. Some place where I could cry to my heart's content. But I was not one of those who would leave the ground, wounded! I had always been the one who took life head on. So was it the time to lean back and contemplate what actually went wrong? No. That won't be the man, the world knew! So.. was it the time to build a castle around my feelings and play cold? ~ Prince Mishra
Post a Comment
Read more