Bihar elections are one of a kind in India. They have a very special ingenuity that's uniquely different from elections contested in any other part of the country. And who knows that better than you? You have lived the King for three reigns.

Your plank of caste, your efficient use of your "lathi" and your everlasting love for "fellow Yadavs" has returned you favors, to which your consecutive wins can rightly be attributed. But what went wrong now? Has Bihar's illiterate and "dehaati" public stopped playing ostrich to your political drama, or is it just the light of development Nitish showed us? Something somewhere is just not right for You.


Soniaji atleast accepted her defeat. You, are still playing obnoxious. We are no fools Laluji.
Moments after the mandate came out, Bloggers, Writers and media persons throughout internet and newspapers brought out how the landslide win of NDA over RJD was rightly due to the taste of development, Nitish brought to Bihar. However You haven't been able to digest the fact that the illiterate Biharis have grown over the "caste" shit that you once played them into.

This letter is an effort to awake You of what Nitish did and You did not. Where You failed and where Nitish scored. It is a voice to all those whose mandate, You have not been able to swallow.


You have done so much for Bihar, you know. Laluji, You made Bihar a state that hit headlines for all the wrong reasons -- high crime rate, caste politics, poor healthcare, low literacy levels, and a pathetic record of human development. You actually dissuaded people from demanding roads on grounds that if villages were connected, the cops will have access which means an end to illegal activities. How learned of you! 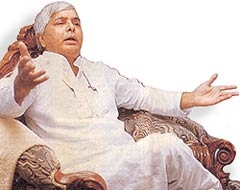 While giving a free hand to your caste cousins, namely the Yadavs, You unleashed a reign of terror where kidnappings were rampant as was demanding ransom. Doctors with roaring practice, were prime targets on grounds that they will be able to shell out huge sums as ransom; the culprits were Yadavs who had sieged all peace in Bihar; they not only had police protection but a nod from powers that were to turn a blind eye to the total collapse of law and order: “No one” a doctor once wrote to HT “is safe in Bihar. I worry for my family”. 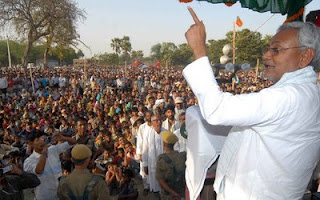 That was Bihar of the past. Your Bihar.

Post Nitish, things are dramatically different. Fear and lawlessness have disappeared and roads have appeared. Today one can drive in Bihar and many villages are well connected.

In the past five years, the state has laid over 25 percent of the road network that was added since independence. The total length of all-weather roads stands at 46,107 km -- of which nearly 10,000 km has been built since 2006-07.

It was not without reason Microsoft founder Bill Gates made it a point to speak to Nitish Kumar during his India visit -- the only chief minister to enjoy the privilege -with praise especially coming in for what has been done in healthcare.

It's not just roads, over the past five years, the state built more than 2,100 bridges over rivers and water bodies too, translating into an unprecedented one-and-a-half bridges every day -- an achievement that surpasses what was done in the preceding four decades.
All this has ensured double-digit growth for four years, much higher than the 8 percent average growth the country as whole has logged. Bihar also provided jobs to 4.2 million people last year under the employment guarantee scheme, ensuring coverage of a 10th of its population of 100 million.
The impact has been so tremendous that industrialists from other states have started thinking about setting up units in Bihar.

Nitish played the development card versus the caste card. This is not to say he ignores the caste factor: anyone in politics, sadly, cannot. But he has his priorities right: development followed by caste. So if anyone were to tell me that Nitish does not care about caste politics is lying.

As I said that caste is an evil necessity in Indian politics and whoever wants to remain or return to power has to keep caste considerations in mind. Intelligent politicians like Nitish do not play the caste card at the cost of development; fools like you do, though it is caste which got you power in the first place and helped you retain it for over a decade.

It is caste which accepted your illiterate wife Rabri Devi’s rule when you were sent to jail for the fodder scam. But caste also has a time frame and after a point proves counter productive. Like it did for you and threw you out of the state. Enter Nitish and people heaved a sigh of relief: peace returned to Bihar.

I will definitely add that, though things may not be the way they ought to be, people may not be sleeping with their doors open but they feel safe in their homes and places of work. That followed by development are the two things Nitish has given to the people which your regime had willfully and calculatedly taken away. Even if corruption which peaked during your reign, has not ended, it is currently not a key factor in decision making.

I think BJP’s Ravi Shanker Prasad summed up the situation well when he narrated his recent Bihar experience. While driving through a crime prone stretch and chatting with villagers to get a sense of the situation, a political worker told him: “I am a RJD supporter; I will only vote for Lalu. But I want to tell you and all others present one thing: I have a brand new motorcycle; I am carrying 10,000 rupees in cash and wearing a gold chain around my neck. I am not only venturing out in the evening but intend to travel till well past midnight. This is possible only because of Nitish Kumar”.

Just my point: irrespective of the electoral outcome, Nitish Kumar has done for Bihar and its people what You single-handedly destroyed. If Nitish ushered in peace and development in the state, You did exactly the opposite and I repeat that You backed goons, gave the Yadavs a free hand to run riot; protected and encouraged criminals and looted the state exchequer. If in past years, doctors and professionals feared for their life, today they breathe free. There was a marked improvement in law and order situation in the state, police were active and there were fewer incidents of harassment, teasing and kidnapping of women.

FYI, Your suggestion that the bicycle given to girls were being misused for going to meet their boyfriends during the school hours is all rubbish. There has been a marked growth in school admissions in the last two years. And whether you agree or not, all these silly remarks do not affect the common Bihari anymore. We have grown up, Laluji.

Analysts say the growth factor, along with sustained focus on infrastructure, health, education, jobs and law and order -- 54,000 trouble-makers, several of them politicians, were arrested and convicted during Nitish's tenure -- naturally emerged a sure winner.

Also remember You and me are the descendants of the great Aryabhatta, the man who invented the concept of zero. And that's You gave Bihar, a big Zero! Zero development. Zero growth.

Thanks to you Laluji, the migrated youth had lost all hopes of ever returning back to Bihar, but if the situation in Bihar improves, I will go back. I will definitely go back. Many Bihari youngsters are thinking like me. Nitish Kumar should not fail us. We are ready to do anything to help rebuild Bihar, but we want a crime free state and a political process that is ready to bring in change.

November 14, 2011
"I Quit" , said she and walked out as briskly as she could, her face as stern as a stone. She didn't look back. I wanted her to. I felt helpless, somewhat creepy, and a sudden chill went down my spine. I didn't know what to do. I wanted to just run away. Run away from her. Run away from this world. Run away to some distant place where I could be myself. Some place where I could cry to my heart's content. But I was not one of those who would leave the ground, wounded! I had always been the one who took life head on. So was it the time to lean back and contemplate what actually went wrong? No. That won't be the man, the world knew! So.. was it the time to build a castle around my feelings and play cold? ~ Prince Mishra
Post a Comment
Read more